Here you will find contact information for Senator Pat Toomey, including his email address, phone number, and mailing address. 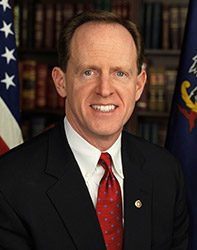 Senator Patrick Joseph Toomey Jr. is an American politician and businessman. He has been serving as a junior U.S. Senator from Pennsylvania under the Republican since 2011. He was also a member of the U.S. House of Representatives from 1999 to 2005.

Toomey was born in Providence, Rhode Island, on November 17, 1961. He was an avid member of the Boy Scouts and had attained the rank of Eagle Scout. He attended high school on scholarship and graduated as valedictorian of his class. He received his B.A. in Government from Harvard College in 1984.

After his B.A., Toomey worked for Chemical Bank, where he dealt with currency swap transactions. He joined Morgan, Grenfell & Co., In 1986. But, Toomey resigned after the Deutsche Bank acquired the firm in 1991. Subsequently, he opened a restaurant in Allentown with his younger brothers

Toomey started his political career in 1994. Then, he was elected to Allentown’s Government Study Commission. During his service at the Commission, he drafted regulations on local taxation.

In 1998, Toomey ran for a seat at the U.S. House of Representatives. He was looking to represent Pennsylvania’s 15th District after incumbent Paul McHale’s retirement.

In the general election, Toomey defeated Roy Afflerbach with 55% of the votes. He was re-elected in 2000 and 2002. But, he left office after his 2002 tenure ended. He did that to honor his 1998 pledge not to serve more than three terms in the House.

Unfortunately, Specter lost the Democratic primaries to Joe Sestak. Toomey won the Republican nomination and defeated Democrat Sestak in the general election. He assumed office in 2011 and was re-elected in 2016.

Toomey’s administration has led the effort to reduce taxes and end wasteful spending. He has worked on financial reforms and budgetary issues.

He has also worked towards a more competitive business tax code in the state. He also advocated for the replacement of graduated taxes with a flat tax based on income levels.

Toomey has also made legislative achievements in the formulation of trade and foreign policies. He requested the preservation of the North American Free Trade Agreement