Current U.S. Senators for the state of New Jersey:

Since the enforcement of the Seventeenth Amendment to the United States Constitution, U.S. senators are popularly elected for a six-year term beginning January 3. Elections are held the first Tuesday after November 1. Before 1914, they were chosen by the New Jersey Legislature, and before 1935, their terms began March 4. The state's current Senators are Democrats Bob Menendez (serving since 2006) and Cory Booker (serving since 2013).
Source: Wikipedia
https://en.wikipedia.org/wiki/ListofUnitedStatessenatorsfromNew_Jersey 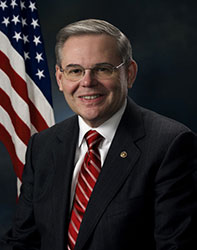